Shakespeare with a Small Group - Part 1: The Performance 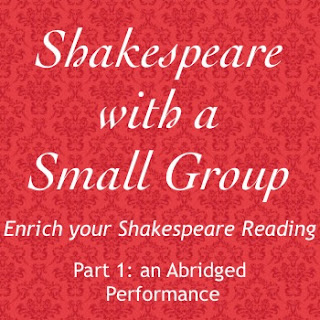 In my overview post for this series, I outlined what I was looking for in a Shakespeare study for my older children.  In this post I'd like to describe what I did for my first idea, the abridged performance.

Last August, I invited three other families to join us in our Shakespeare study.  We had a total of 11 children, ages 9 - 13, who participated in the play.  We also had a number of younger siblings, some of whom were roped in at the last minute to play small non-speaking roles.


Materials
I used a script from Shakespeare with Children: Six Scripts for Young Players.  I like this book because it uses Shakespeare's own language for the plays, adding a narrator to bring the play together and move the action along.  I thought the abridgment of The Tempest was very well done.  The book is rather large and bulky and clearly directed towards a teacher in a classroom.  I wasn't sure how the author intended the book to be used for a class, but I ended up having the spine cut off and the pages punched at a local copy store, then making copies of the script for the kids.

First Session
At the first session, I read an abridged version of The Tempest, pausing often for narration and to let the students add details to their character and plot maps.  This took about an hour.

After we became familiar with the story, I passed out copies of the script from Shakespeare with Children: Six Scripts for Young Players and assigned temporary parts to the kids.  We moved outside for our rehearsal and started reading through the first act of the play.

I decided not to assign parts immediately, so I could get a sense for how well the children read and how interested they were in performing.

Second Session
In the second session, I started with a game to help the kids refresh their memories about the plot and the characters.  I printed the names of the characters on slips of paper and had the kids lay them out on the table.  Then I had a separate stack of cards with character attributes or something the character did in the play which I passed out to the kids.  The kids helped each other place all the names, then we briefly reviewed the plot using our character and plot maps.  I think this took about a half an hour, perhaps a little more.

After this review, I started handing out parts and we began reading through the play.  With 11 actors, plus me as the narrator, we had just enough to cast the play.  Some of the kids had two parts and with a few small changes we were able to cast the play so that they didn't have to appear on the stage at the same time as two different characters.

Third - Fifth Sessions
At these sessions, we immediately jumped into rehearsing the play.  Sometimes I would have the kids rehearse just the movements of the scene, and sometimes we would read and move around.  I wanted the kids to be very familiar with their parts, but I did not expect that they would memorize them in this short of a time.  I also encouraged the kids to read through their parts in between sessions, but only a few of them actually did this.

Sixth Session
Our sixth session together was a dress rehearsal.  I asked the performers to bring a costume and props for themselves as well as anything they thought might be handy for other players.  After a little discussion and creativity, everyone had basic costumes.  We rehearsed the play again in costume and with props, both with dialogue and without.

Family Performance
I asked the families to come over at about 3:30 p.m. so we could get ready and start our performance at 4:30.  We have a very open floor plan at our house, and suspended a large drop cloth from the ceiling to serve as a backdrop for the play.  We rearranged our family room furniture, added a few more chairs, and had a cozy little theater, complete with a backstage and an off stage room for props and quick costume changes.

Our performance lasted about a half an hour, and everyone really enjoyed it.  The kids performed in costume with props and scripts in hand, but they were generally familiar enough with the play and their parts that they could move through the play well and act as they read.  After the play, we had shared a meal, visited, and prayed together.  We finished up at about 7:30 p.m.

What I Might Do Differently Next Time
I was really quite pleased with how this went, and there isn't much in my control that I would change.  This is an activity that is best when everyone is able to attend each time, and we were somewhat hampered in this by schedule conflicts.  It would have been nice to be able to rehearse multiple scenes at the same time, but with the number of actors this wasn't quite possible.  I especially would have liked to spend more time rehearsing the last scene of the play with everyone, but with the scheduling problems we didn't have time.  But in the end the kids carried it off well and I think it was a memorable, enjoyable, and worthwhile experience for everyone. 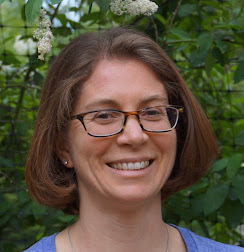 My name is Amber, and I'm a Catholic homeschooling mother of six children, ranging from a toddler to a seventeen year old. I try to order our homeschool to Charlotte Mason's philosophy of education. We live in the foothills of the Sierra Nevada mountains in California.
More about me.